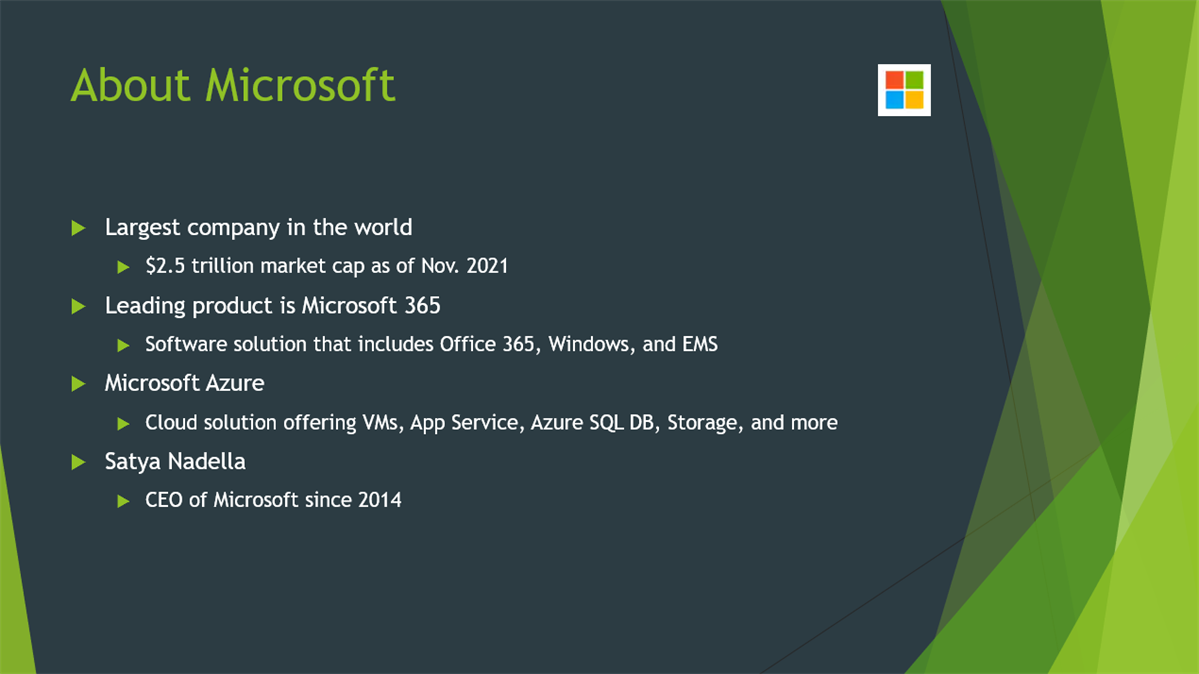 Founded in 1975, Microsoft is the largest company in the world today by market cap. Its $2.5 trillion market cap recently put it ahead of another GPM Grade Company, Apple. Microsoft is best known by its Microsoft 365 offering which includes Office 365, Windows, and Enterprise Mobility + Security (EMS). Office 365 is a subscription to software like Word, Excel, PowerPoint, Outlook, Teams, and much more. Microsoft leverages its huge install base of Windows and Office to drive growth of its new products. Teams, for example, launched in 2017 and now has 250 million daily active users of the app (per the Q4 FY21 earnings call). On the most recent Q1 FY22 earnings call, Satya Nadella said there are now 138 organizations with over 100,000 users of Teams. 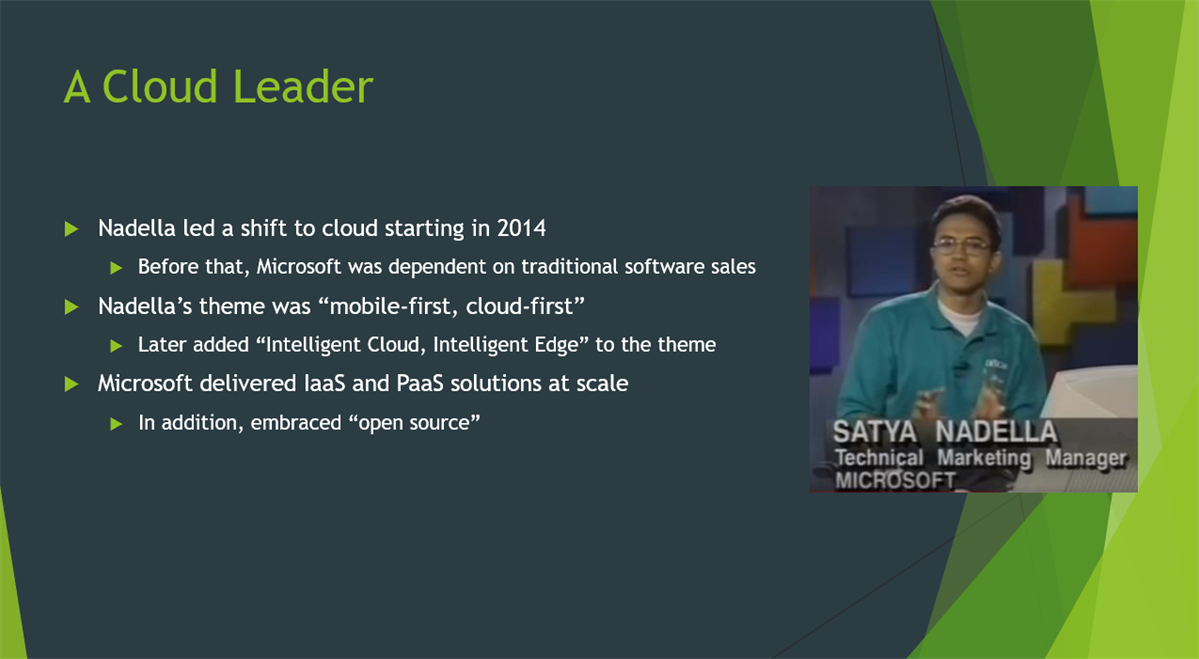 CEO Satya Nadella turned Microsoft into a cloud leader since taking over for Steve Ballmer in 2014. Before Nadella, Microsoft relied on traditional software sales and its business had a hard time growing. Nadella embraced the theme of "cloud-first, mobile-first" which put a greater emphasis on selling cloud subscription software to customers. Instead of paying a one-time price of a disc with Office and a license key on it, customers now paid a yearly subscription to download Office. Microsoft gets the benefit of steady subscription cash flows, while users get the benefit of software that keeps getting better and better over time through updates delivered from the cloud.

Microsoft's success comes from its ability to deliver Infrastructure as a Service (IaaS) and Platform as a Service (PaaS) at scale. Back in 2016, Microsoft offered 34 "Azure regions" across the world which was more than Amazon Web Services (AWS) and Google Cloud combined. Microsoft could meet unique data residency promises that no other company delivered. A big barrier to entry was Microsoft's ability to build out 2-mile long data centers with millions of servers running inside. Microsoft also had more trust certificates than any other cloud vendor. Microsoft differentiated its cloud through features, security management, and hybrid flexibility, which was good for startups growing quickly. Microsoft's huge workforce of engineers writing and distributing code was unmatched. All of these factors made Microsoft the leader in a business with nearly unlimited total addressable market (TAM). 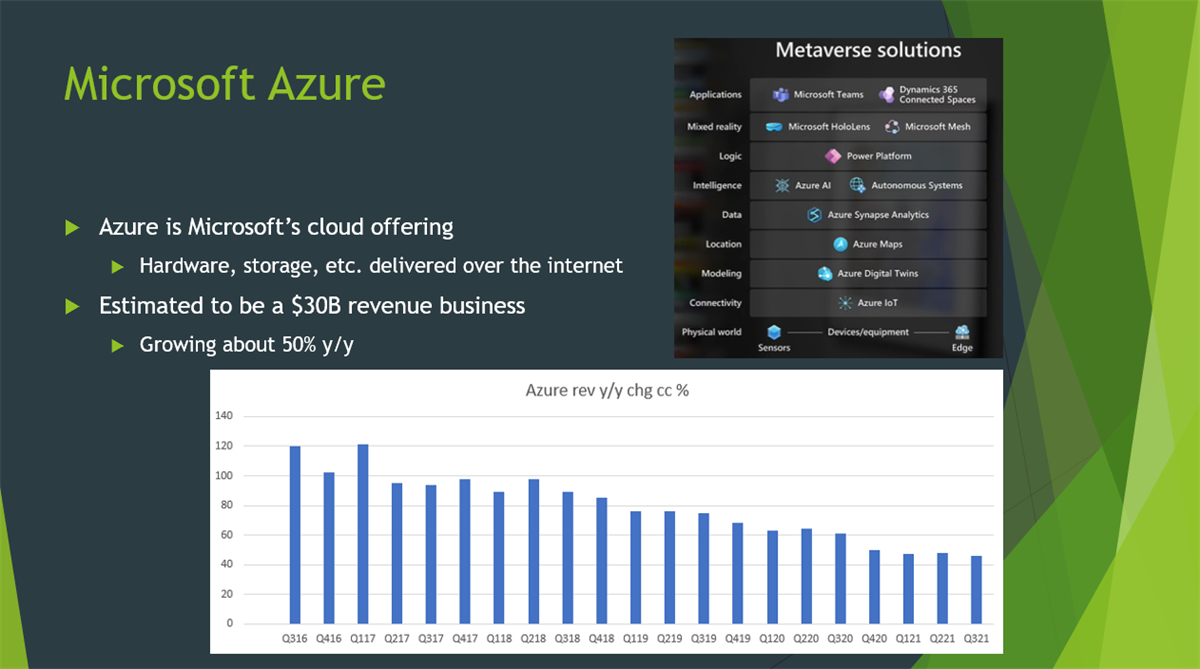 A large part of Microsoft's success is Azure, Microsoft's cloud offering of hardware, storage, and more. Current estimates show Azure's annual revenue to be around $30 billion. As seen in the chart above, Azure's revenue is growing at a high rate. Even as revenue approaches $30 billion, it continues to grow nearly 50%! While that is half the growth rate of earlier years, the dollar value of the current growth is much higher. Microsoft looks to leverage Azure into new growth opportunities. At the recent Ignite conference, Microsoft displayed its solutions for the "metaverse", which is the virtual reality, computer-rendered world that many in the tech world believe to be the next computing platform. 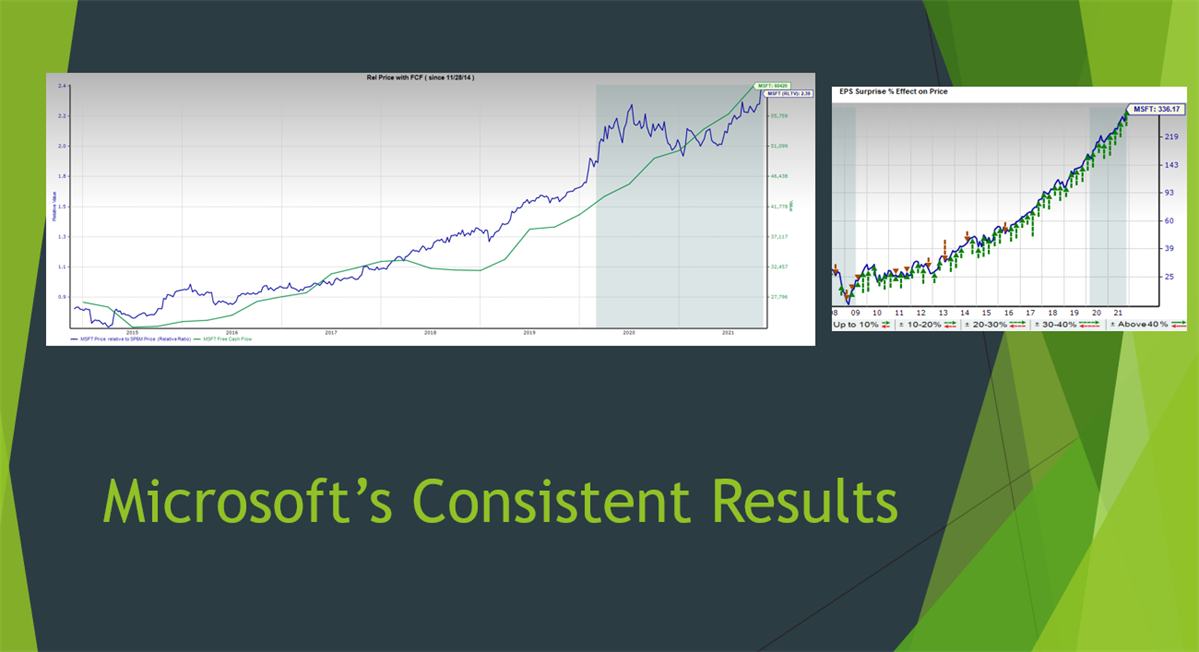 In conclusion, Microsoft is a GPM Grade company, delivering consistent, high-quality results. The chart above on the left shows Microsoft's free cash flow generation (green line) since Nadella took over in 2014 compared to MSFT's stock price performance relative to the S&P500 (blue line). Free cash flow has grown at an annualized rate of 13%, while the stock delivered 30% annualized returns (vs. the 14% of the S&P500). The right chart shows Microsoft's earnings results over the last decade. Notice that when Nadella took over in 2014, it is nearly all green arrows on the chart, which shows how Microsoft has steadily delivered results above the market's expectations.