To start with, this week the BLS (Bureau of Labor Statistics) released CPI (Consumer Price Index) data for June which showed a jump in the index above market expectations. Bloomberg shared a chart showing the largest contributors to the increase: 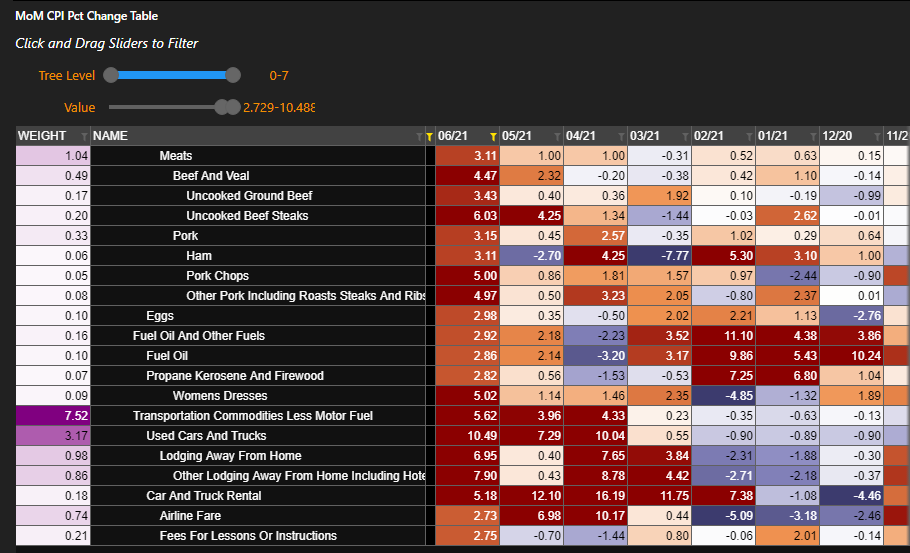 The chart reads from left to right with 06/21 being the latest data. The item that stands out the most is Used Cars and Trucks. Consumers are flush with cash after stimulus while also seeing their savings increase greatly, and after spending more time in their cars during the pandemic, it is leading them to buy new cars. At the same time, because of the pandemic, there is a shortage of the semiconductors used in cars, making it difficult for manufacturers to finish producing automobiles. The result of this is dealerships that do not have enough inventory to meet demand. This is causing used car and truck prices to increase over 10% in June after increasing 7% in May and 10% in April.

Next up, the Wall Street Journal put out an article that describes how founders of companies are putting up their shares of the company as collateral for a loan in order to participate in the economic gains without giving up a percentage of their voting power. Here is a clip from the article: "Jared Isaacman cemented his billionaire status when his payment-processing company went public in June 2020. Three months later, he put up about half his stake in Shift4 Payments Inc. (FOUR) as collateral for a loan from Citigroup Inc. He repaid that loan in March—and promptly took out a new one from Goldman Sachs. The loans let Mr. Isaacman, 38 years old, tap his wealth without shrinking his stake—now worth nearly $3 billion. He retained more than 70% voting power as of April, after having invested most of his net worth in the company’s initial public offering." The WSJ notes that individuals with over $100 million can get interest rates as low as 0.87% on these securities-based loans. Here is a chart showing the increase in these loans over time at Morgan Stanley: 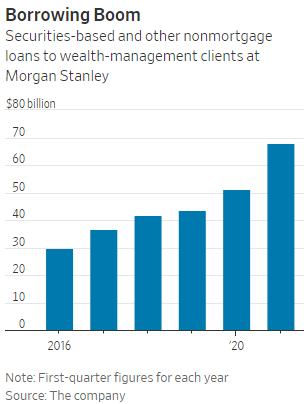 Lastly, there is news that my favorite restaurant, Portillo's, is planning its IPO (Initial Public Offering) later this year. According to WSJ, Portillo's plans to raise $2.5 to $3.0 billion. Dick Portillo founded the restaurant, famous for its hot dogs, Italian beef, and chocolate cake, in 1963 as a single hot dog stand near Chicago. After many years of growing the company, Portillo sold it to a private equity firm in 2014. According to QSR magazine, this will be the fourth restaurant IPO in recent months, with Krispy Kreme, Sweetgreen, and Dutch Bros Coffee being the others.

Here is some music to enjoy: