Earnings season was in full swing this week. According to Zacks Research, for the 73 S&P 500 members that reported results already, total earnings are up 108.2% on revenues 15.5% higher. The triple digit earnings growth is mostly due to easy comparisons, mainly in the Finance sector. So far, 89% of companies beat EPS estimates and 84% topped revenue estimates. It is not just easy comparisons, however. When comparing to the second quarter of 2019, total index earnings are expected to be up 16%. Chipotle, Netflix, and Intuitive Surgical are among the companies that reported results this week.

First, Chipotle gave us good insight into the service industry and how it plans on dealing with inflation. The big question for everyone currently is whether inflation is transitory or permanent. CEO Brian Niccol pointed out labor inflation as one of the main reasons that the company increased menu prices recently. Companies like Chipotle that have pricing power will be able to offset inflation. Another concern is the Delta variant of the virus. The recent spike in cases is creating unknowns just as Chipotle is back to having all of its restaurants open again. Specific to Chipotle, the company reported comparable sales growth of 31.2% with restaurant-level margins twice as high as last year. Digital sales make up 48.5% of total sales.

Next, Netflix reported strong growth despite having a tough comparison due to the spike of memberships during lockdowns last year. Netflix finished the quarter with 209 million paid members. Members grew 8% in the quarter which was on top of 27% growth in the second quarter of 2020. The company provided a chart showing the difference in growth trajectories in normal years compared to the pandemic distorted year and now the current year to date: 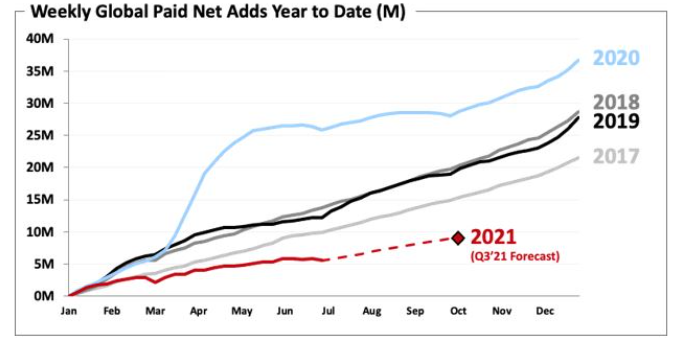 One can see the large spike as the lockdowns took place in 2020 and how 2021 is lagging behind prior years. In terms of Netflix's content, the company received 129 Emmy nominations, with 24 nominations for The Crown. Other shows that received nominations include Bridgerton and The Queen's Gambit. Netflix announced that it was in the early stages of expanding into video games as another new content category. The games will initially be for mobile devices and available to subscribers for no extra cost.

Lastly, we got a look at the medical devices sector of healthcare through Intuitive Surgical's earnings release. Intuitive Surgical makes robots for hospitals. Its main platform is the da Vinci Surgical System which is designed to enable complex surgery with a minimally invasive approach. As the pandemic hit last year, Intuitive saw a large decline in its results due to patients putting off elective surgeries. With this quarter, Intuitive reported a compound annual growth rate for procedures of 16.5% from the second quarter of 2019 to the second quarter of 2021. This is the growth rate that management expected absent of the pandemic. The conclusion was that the pandemic reordered the quarters in which procedures were performed. Some procedures are still delayed and likely to return in the future. With the vaccine rollout and the Delta variant, there is a decoupling of infections and hospitalizations. The number that affects Intuitive and other medical device companies the most is hospitalizations. So, despite higher infections, hospitalizations are not following the same path. CEO Gary Guthart stated, "lockdowns decrease patient mobility and willingness to go get their tests and then hospitalization diminishes ICU capacity. So those are the drivers we watch."

In conclusion, we have seen very strong growth so far in the second quarter, with Chipotle showing strength for restaurants and dining, Netflix displaying continued growth in at-home entertainment, and Intuitive proving elective surgeries are still getting done at its expected rate, just not in the quarters originally thought. While the pandemic created large distortions in growth rates, when looked at over the last two years, many companies are seeing growth that is either in-line with original expectations or in some cases, even better growth.

Here is a wonderful song to enjoy:

This is Gene Harris' 1976 song "Soft Cycles" off his album called "In a Special Way". Blue Note released the album and it was recorded at The Total Experience Recording Studios, Hollywood Sound Recorders, and Devonshire Sound Recorders, Hollywood, California during March, April and May 1976.