CFO Olsavsky said, "We continue to be very pleased with the Prime member growth and engagement we're seeing. We've been fortunate to welcome more than 50 million new members in the past 18 months, and Prime member benefits usage remains high."

Here are the results for Amazon's cloud segment, AWS: 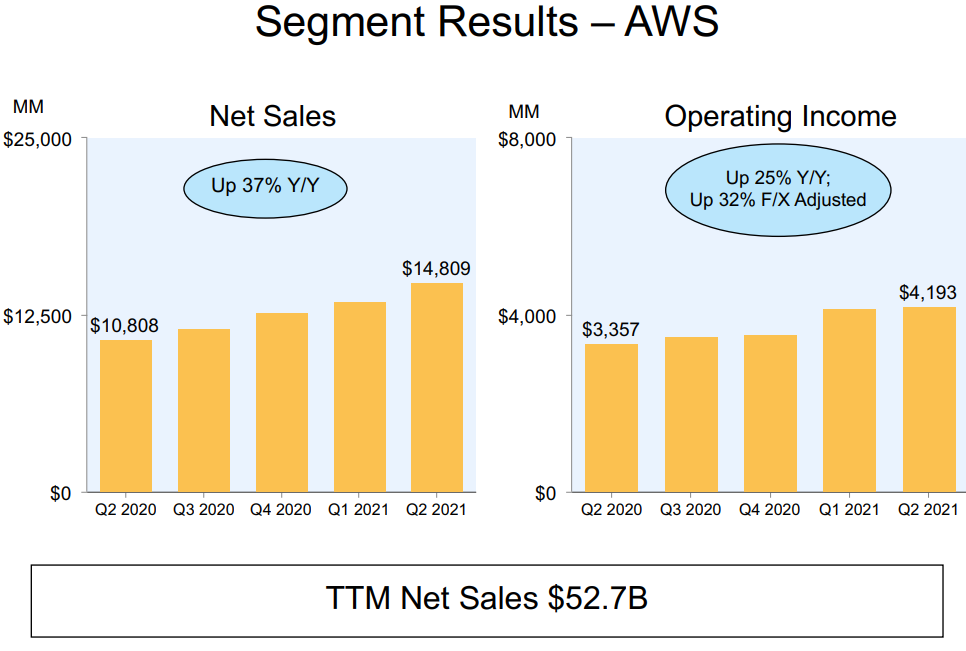 AWS is important because the segment makes up about 10% of Amazon's total sales, but AWS is over 50% of the company's operating profit. It is a key driver of Amazon's success.

CEO Cook said, "This quarter saw a growing sense of optimism from consumers in the United States and around the world, driving renewed hope for a better future and for all the innovation can make possible."

CEO Zuckerberg said, "So what is the metaverse? It's a virtual environment. We can be present with people in digital spaces. And you can kind of think about this as an embodied Internet that you're inside of rather than just looking at. And we believe that this is going to be the successor to the mobile Internet."

CEO Pichai said, "we saw a rising tide of online consumer and business activity. We are proud that our services helped so many businesses and partners. In fact, we set a number of records this quarter. This quarter, publisher partners earned more than they ever have from our network. We also paid more to YouTube creators and partners than in any quarter in our history. And on top of that, over the past year, we have sent more traffic to third-party websites than any year prior, in addition to generating billions of direct connections like phone calls, directions, ordering food and making reservations that drove customers and revenue to businesses around the world that are working to get back on their feet."

CEO Nadella said, "every person and every organization will require more digital technology to be more resilient and to transform. We are innovating across the entire tech stack to ensure our customers succeed in this new era."

Check out the metrics Microsoft shared for its fast-growing Commercial business:

In conclusion, all five of the largest US companies reported strong results and very high growth rates, especially given the enormous market caps of these businesses. According to Zacks, 195 S&P 500 members reported Q2 results so far, with total earnings up 105% on revenues higher by 22%. About 91% of companies beat EPS estimates and 86% topped revenue estimates.

Here is some good music to listen to:

The song is "Hot Dogs" by I Gres. According to Discogs, I Gres was an "Italian four-member library music group, consisting of Giorgio Carnini, Roberto Pregadio, Enzo Restuccia and Silvano Chimenti." Their self-title album was released in 1974 on Globevision.